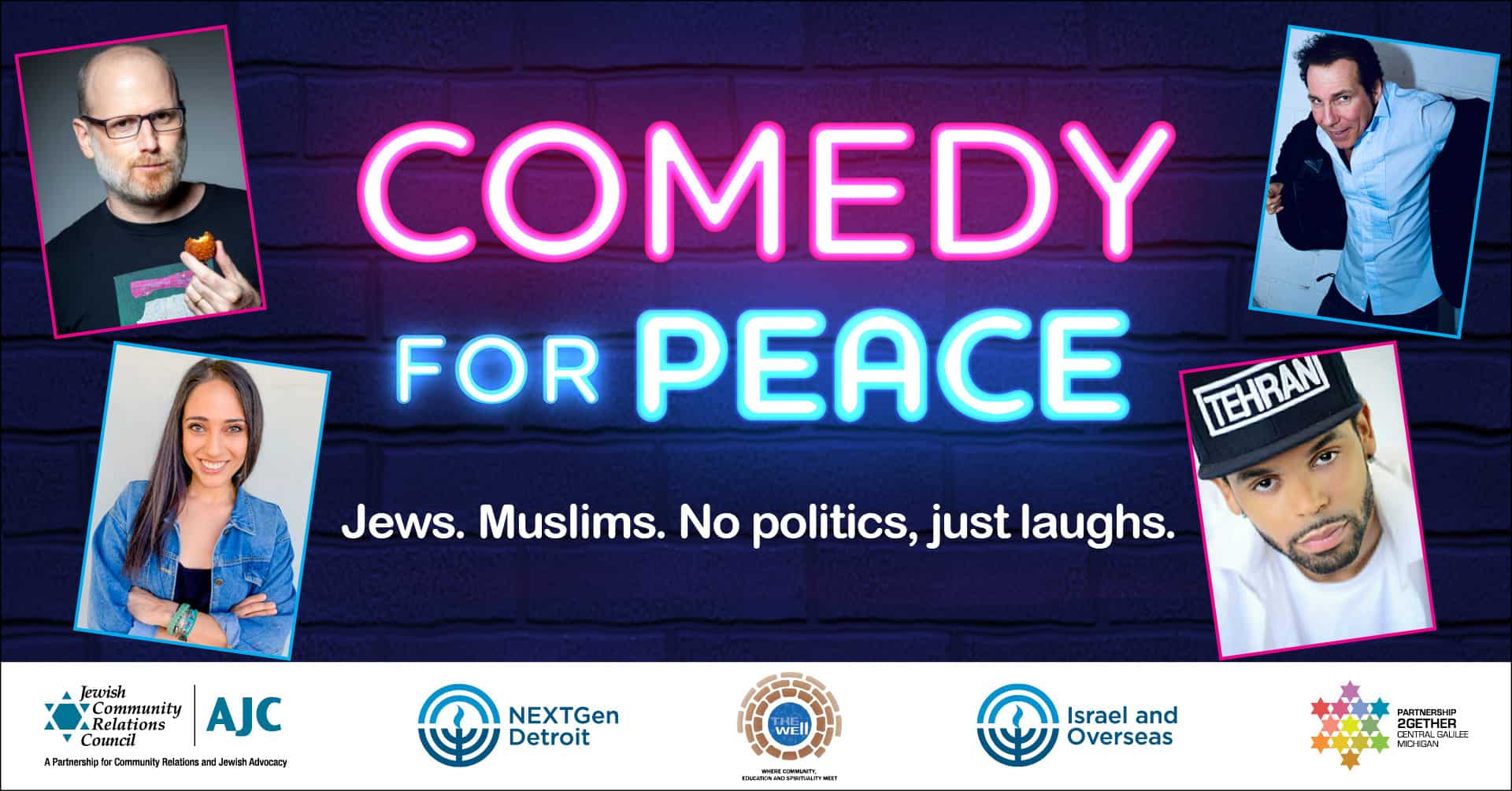 Join us for a great night out!

Comedy for Peace is a traveling comedy show that combines Muslim and Jewish stand-up comedians for a fun and inspiring night of humor. It’s funny, meaningful and brings our two diverse communities together with the belief that we can make a difference through the art of comedy. Comedy for Peace is a relief from the concerns of the day, with an important message that we, the people, just want to live together peacefully.

Tickets are just $20 and your first drink is on us. Register here:
https://jlive.app/events/1629

Comedy for Peace is the first of a series of three ‘Shared Society’ events, each with the goal of bringing people together and ultimately creating a stronger shared community.

The Comedy for Peace lineup, which has been touring since 2019, features a number of seasoned performers, including:

Dotan Malach (Erik Angel)
An Israeli-Jewish comedian and the founder/producer of the Comedy for Peace Show. Born and raised in Israel, he is now based on the Upper West Side where he is getting to know the American comedy scene. As a new transplant to New York, he is now dealing for the first time with the fact that he is a Jew, an immigrant, and that no one around him understands Hebrew. Since his arrival in New York a year and a half ago, he performed in clubs around the city including West Side Comedy Club, Greenwich Village Comedy Club and the Broadway Comedy Club, as well as performing internationally.

Tehran Von Ghasri
One of the hottest rising comedians on the comedy scene. With a diverse contrasting background of Black, Persian, Muslim and Jewish, street smarts and educated, Tehran brings a fresh, unique perspective to comedy and humor. As seen on Comedy Central, HBO and Fox. He performs regularly in the Laugh Factory in L.A.

Reem Edan
An Iraqi-American comedian, writer, actress and digital content creator known for her unique brand of “Muslim-Ennial” humor. She has performed at venues and colleges across the US, Europe, Japan and the Middle East, opened for Arsenio Hall, and is an alumni of the 2020 NBC Late Night Writing Workshop. She was recently named on Bustle’s list of “5 Muslim women comedians to get you through social distancing”.

Steve Marshall
New York based Jewish American comedian, actor and a writer. A wild, unique, energetic and smart performer, with 25 years’ experience in the biggest clubs in the city, and touring regularly throughout the United States.

Must be 18 or older. COVID-19 Guidelines: Masks are required when not eating or drinking. Tickets will be limited to allow for social distancing.