The Jews in London – 1,000 Years of History in about an Hour 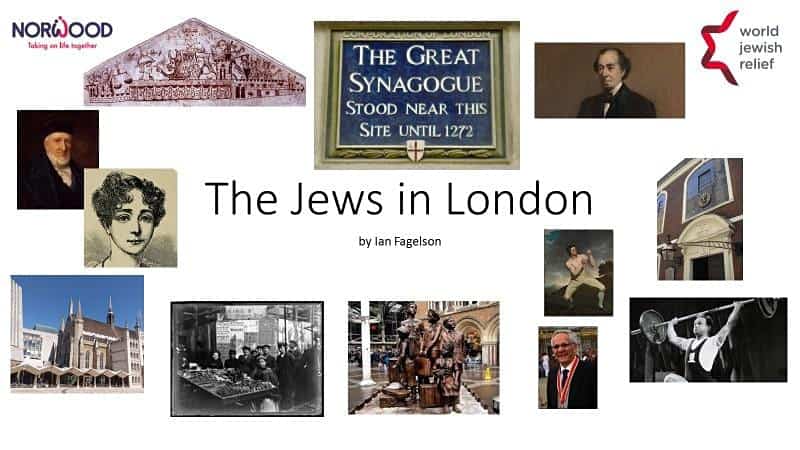 I make no charge for admission to this event. Instead, I invite participants to make a donation to charities that are close to my heart. My current charities are Norwood (which helps people with learning disabilities and families in crisis) and World Jewish Relief (which helps impoverished elderly Jewish people in the former Soviet Union and people of all races and religions affected by disasters worldwide).

Using the magic of Zoom, we will take a journey through the streets and alleys of London to discover the thousand-year history of the Jews in England. From the arrival of a Jewish community from Normandy in 1066/67 to the Kindertransport children of 1938/39, Jews have played important roles in the unfolding drama of British history. On our journey we will encounter the Jews of medieval London, the unfortunate Jewish doctor who inspired the creation of Shylock, Queen Victoria’s favourite Prime Minister, the Jewish stockbroker who saved the British government during the 1745 Jacobite rebellion, the Protestant rabble-rouser who became an Orthodox Jew, the Jewish prize-fighter who transformed the sport of boxing and other colourful characters. We will visit some of the most spectacular sites in the City. We will also reveal the little-known Jewish associations of some of London’s most famous landmarks.

Here’s how the Jewish Chronicle headlined its review of the tour : “Ian Fagelson’s Jewish London tours have gone virtual, attracting a global turnout. And Norwood and World Jewish Relief reap the rewards” https://www.thejc.com/top-ten-charitable-tour-guide-continuing-his-journey-online-1.507885/

And don’t just take it from us. Here are Ian’s Tripadvisor reviews https://www.tripadvisor.co.uk/Attraction_Review-g186338-d14978438-Reviews-Ian_Fagelson_London_Tour_Guide-London_England.html/ (In baseball terms Ian, uniquely, has pitched a “perfect game” – 266 reviews in total, all 266 of them five stars. Not a single **** or *** or ** or *). That’s a distinction no other tour guide in London has achieved.